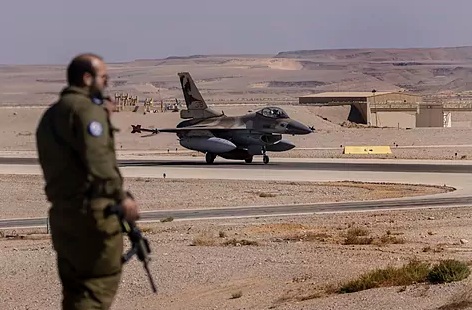 The noise of more than 70 fighter jets from eight countries in the largest international exercise in Israel's history contrasts with the official silence on the possible return of the Israeli military option to thwart the Iranian nuclear plan. After four years, the Air Force has decided to return to specific training to be ready if the order to act in the so-called "third circle" arrives.

"This air maneuver, prepared for a year, is not focused on Iran or has to do with specific challenges," an Israeli high command clarifies to EL MUNDO at the southern Ovda air base a few days after the fifth edition of Blue Fag . Eight Armies, under the observation of another eight, rehearse flight scenarios for air-to-air and surface-to-air missiles, coordinate the action of aircraft of different types and generations, and complete the mutual learning of pilots with different contexts and modes of action. Of all of them, the Israeli pilots know that, if the diplomatic channel of the powers before Tehran fails, they will be the ones who will receive the slogan of the mission against the nuclear power plants in Iran.

Resuscitating the letter of an eventual attack, the Israeli leadership raises the pressure in the face of Iran's uranium enrichment advance, which has been accelerated significantly after the US abandonment of the nuclear agreement in 2018 and the absence of a new pact.

Two recent reports from Israeli Channel 12, not officially denied, point in this direction. On the one hand, the Air Force is re-training a bombardment of Iranian nuclear facilities which, being so diversified, underground and armored, represents a much more complex challenge than the one that destroyed the reactor in Iraq (1981) and Syria (2007). On the other, the approval of 1,300 million euros of the budget (both the Defense assigned and the general to be approved before November 14 in the Knesset) basically dedicated to the Air Force to acquire more weapons and Intelligence systems on the nuclear project Iranian. Leaks that can be interpreted as a means of pressure on the powers to bring Tehran to a stricter agreement than that of 2015.

In a message on Twitter in Persian, Hebrew, English and Arabic, Iran's Supreme National Security Council Secretary Ali Shamkhani replied: "Instead of allocating a $ 1.5 billion budget for atrocities against Iran, the Zionist regime it should focus on providing tens of billions of dollars in funding to repair the damage that Iran's shocking response will cause. " If Tehran denounces that its enemy is the only one with nuclear potential in the Middle East, the Israeli leadership sees as an "existential threat" that unconventional weapons are in the hands of a country that demands the destruction of Israel.

Meanwhile, the only thing that hits the Negev desert is the sun and the sound of dozens of fighters from the USA (F-16), Israel, (F-35, F-15 and F-16), Great Britain and Germany ( Eurofighters), Italy (F-35), India (Mirage 2000), France (Rafale) and Greece (F-16) in the most sophisticated international maneuver in Israeli airspace.

"Blue Fag is of strategic importance for Israel and especially for the Air Force. The goal is to improve capabilities and cooperation. It is not easy to combine so many planes from different countries," says Brigadier General Amir Lazar, who highlights the presence of British pilots for the first time since their country left this area before Israel's declaration of independence and the war with the Arab countries in 1948.

"At Blue Fag, we do not train against anyone or rehearse any specific scenario but rather learn from each other. Flying alongside pilots from other countries is an experience that contributes a lot to all of us," the Indian pilot Dhillon told international media in front of a row of F-16s at an open day to the press at the Israeli base.

Greece participated in the first Blue Flag in 2013. On this occasion, it has sent four fighters led by Greek Lieutenant Colonel Dimitrios Papageorgiou who has been in the Air Force for almost 30 years. "In this exercise, we seek to achieve the combination of the fourth and fifth generation of fighters and at the same time exchange knowledge to improve our flight tactics," he says.

The Negev is ideal for this type of exercise since it covers 60% of the Israeli territory and only gathers 10% of the population. The fighters that park in the hangars separated by nationality need only three minutes to reach the maneuvering area while in other countries they must fly much longer to start the practice.

At the Ovda base, 50 minutes from Eilat, the German presence stands out. A week ago and for the first time the Luftwaffe chief, Lieutenant General Ingo Gerhartz and his Israeli counterpart, Major General Amikam Norkin flew over the Israeli Parliament in Jerusalem. In August 2020, they spearheaded a tribute flight over the Dachau concentration camp and the site where 11 Israeli athletes were killed in the 1972 Munich Games bombing. "From the memory of the darkness of the past, we carry a commitment shared with the future, " proclaimed Norkin, who on Monday hosted the chief of the United Arab Emirates Air Force, Ibrahim Nasser Mohammed al-Alawi, on his first visit to Israel. His presence, defined by the Israeli as "historical", It is the result of the 2020 relationship normalization agreement. And a message to Tehran.

When Norkin leaves office in the coming months, he will hand over to his successor Tomer Bar not only more sophisticated F-35s but also the map of red dots signaling threats from Iran through its militias and arsenal in Syria (frequently attacked by Israeli fighters), Hezbollah in Lebanon and Hamas and Jihad in Gaza. Although his most difficult examination, at the moment, is the Iranian nuclear project.
"Israel does not want a war with Iran but it will not allow it to have nuclear weapons. Given the progress in its nuclear project, we are preparing all the options and scenarios, including military capabilities," an official who pointed like another warned this newspaper a few days ago major challenge Iran's use of drones "in attacks by air, land and sea."
Do You Know What we Have Posted on