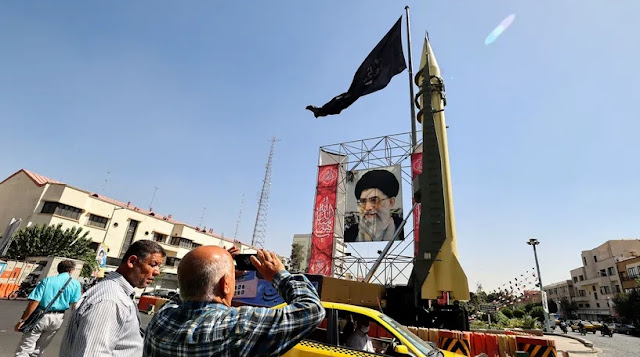 The US government wants to stop Iran from delivering combat drones to rebel groups around the world. It blacklisted two companies and two generals.

The US has imposed sanctions on several companies and people in Iran. The US government accuses them of promoting the development of combat drones to attack targets of the Americans and their allies.

As the US Treasury announced on Friday, the sanctions are directed against two generals of the Iranian Revolutionary Guards, an elite unit of the Iranian army classified as a terrorist organization in the USA: Brigadier General Saeed Aghajani heads the drone command of the Revolutionary Guards, Brigadier General Abdullah Mehrabi is head of their research organization . You will be frozen any wealth in the US and denied access to the US financial market.

The two companies Kimia Part Siwan and Oje Parwas Mado Nafar, which are said to have produced drone parts for the Revolutionary Guard, are also on the black list.

The US accuses Iran of making combat drones and thus fueling a number of conflicts in the region. "Iran and allied extremists have used drones to attack US troops, our partners and international shipping," said US Vice Treasury Secretary Wally Adeyemo. Among other things, Iranian drones got into the hands of the Lebanese Hezbollah militia, the radical Islamic Palestinian organization Hamas and the Houthi rebels in Yemen. Iranian drones are also being used in Ethiopia, "where the escalating crisis threatens to destabilize the entire region".

"The Treasury Department will continue to hold Iran accountable for its irresponsible and violent acts," Adeyemo said.

The leading industrialized countries Canada, France, Germany, Italy, Japan and Great Britain also accuse Iran of endangering international peace with its drone program. Among other things, the country was responsible for a fatal attack on an oil tanker in the Gulf of Oman at the end of July. The government in Tehran has denied the allegations.

US Secretary of State Antony Blinken wrote on Twitter that the US was "determined to oppose all threatening activities by Iran and those who support it."

Biden, Merkel, Johnson and Macron are discussing the atomic pact

Just a few days ago, Iran announced that it would resume talks on its nuclear program that had been interrupted in June. A spokesman for the Iranian Foreign Ministry was outraged by what he saw as the "contradictory behavior" of US President Joe Biden's administration. "By imposing sanctions, it sends a message that inspires no confidence (for negotiations) at all," he said.

The USA, Germany, France and Great Britain want to discuss a possible resumption of nuclear negotiations with Iran on the sidelines of the G20 summit in Rome this Saturday. The White House announced that US President Joe Biden, German Chancellor Angela Merkel (CDU), French President Emmanuel Macron and British Prime Minister Boris Johnson would also raise their concerns about "the current state of the Iranian nuclear program".

The 2015 agreement is designed to prevent Iran from building an atomic bomb. The United States withdrew from the nuclear deal in 2018 under its then President Donald Trump. Trump then put massive sanctions in place against the country. In response, the Iranian government gradually withdrew from many of the provisions of the agreement.