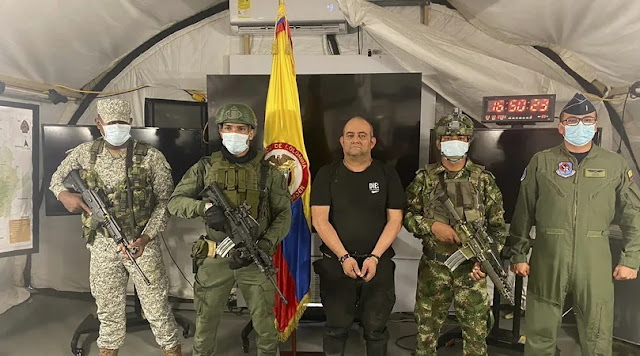 President Ivan Duque spoke of the biggest blow to the Colombian drug trade in decades. Otoniel is said to have supplied the United States with cocaine, among other things.

During a large-scale operation, the Colombian armed forces arrested the alleged head of the powerful Gulf clan, Dairo Antonio Usaga, known as Otoniel. "This is the biggest blow to drug trafficking in our country this century," said Colombian President Ivan Duque in a video message. The blow is only comparable to the case of the drug dealer Pablo Escobar , who died in 1993 during a police operation over the rooftops of Medellín. A police officer was killed in the action.

500 members of Colombian special forces and 22 helicopters were involved in the operation in the province of Antioquia, the United States and Great Britain had provided information. Otoniel is said to have sent numerous deliveries of cocaine to the United States. He was also accused of murdering police officers and activists, sexually abusing children and recruiting minors into his gang, President Duque said. He called on the remaining members to either surrender or experience "the full weight of the law".

A special unit of the security forces had pursued Otoniel for almost ten years. He often changed his whereabouts and hid in the jungle. The USA had offered a reward of five million US dollars (4.3 million euros) for information about Otoniel's whereabouts, while Colombia had added around 800,000 dollars (just under 690,000 euros).

After a career as a left-wing guerrilla and later as a member of a paramilitary group, Otoniel rose to head the "Clan de Golfo". The clan includes around 1,200 armed men, most of them former members of right-wing extremist paramilitary groups. According to the authorities, in addition to drug trafficking , the clan is also involved in illegal mining.

Gulf clan took advantage of the vacuum after the peace treaty

Colombia has suffered civil war between the armed forces, left-wing guerrilla groups and right-wing paramilitaries for more than 50 years. More than 220,000 people were killed and millions were displaced within Colombia. The largest rebel organization, Farc, signed a peace treaty with the government in 2016.

The security situation in the South American country has improved since then. But the peace is fragile five years after the agreement: the smaller guerrilla group ELN is still active. In addition, thousands of former FARC fighters and criminal syndicates such as the Gulf Clan, who have ventured into the vacuum created, are engaged in armed battles among themselves as well as with the police and the armed forces.