Earthquake In Pakistan | At least 20 Dead And More Than 150 Injured In A 5.9 Magnitude Earthquake 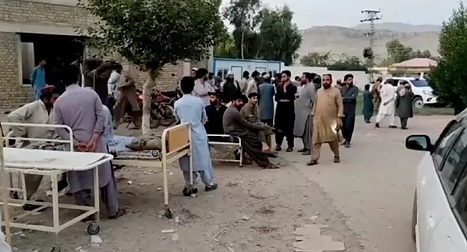 At least twenty people were killed, including several children, and more than 150 were injured in an earthquake measuring 5.9 struck southwestern Pakistan on Thursday as rescue efforts continue.

The 5.9-magnitude earthquake occurred around 03:30 (22.30 GMT on Wednesday) near the city of Harnai, in Balochistan province, at a depth of 9 kilometers, the United States Geological Center (USGS) reported.

"In the earthquake 20 people died, including children, and more than 150 were injured," Balochistan Interior Minister Mir Ziaullah Langau told EFE, noting that the earthquake occurred when people were sleeping, which increased the magnitude of the catastrophe.

Rescue services are trying to locate survivors under the rubble of houses and walls and "a state of emergency has been imposed in the Harnai district", including an emergency call to hospital staff, Langau explained.

"I think there will be more deaths than the number we have so far," acknowledged the minister of Baluchistan, one of the poorest and most unstable regions in the country.

South Asia has a high level of seismicity due to its proximity to the Himalayas, where the two great continental plates of India and Eurasia collide, converging at a relative speed of 40 to 50 millimeters per year.

An earthquake of magnitude 7.7 degrees in 2013 also in Baluchistan caused at least 359 deaths and 750 injuries, while another of 5.6 degrees in September 2019 in Pakistani Kashmir left 37 dead and more than 500 injured.