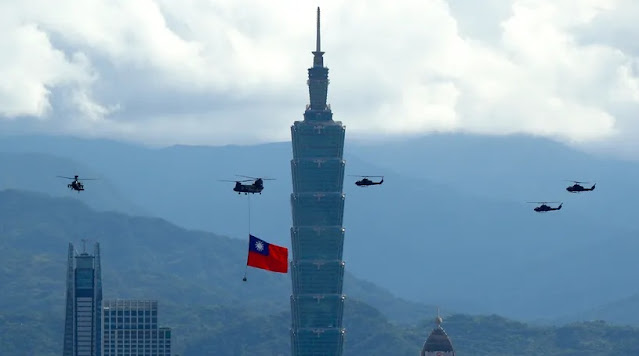 The contradiction between the two messages in China's President Xi Jinping's speech last weekend was evident. On the one hand, he offered Taiwan a "peaceful reunification" and even emphasized: "Aggression and hegemony are not in the blood of the Chinese people." But on the other hand, he called the "independence of Taiwan" a "danger" for the People's Republic and threatened that foreign countries should not underestimate China's determination to bring about national unity. The Taiwan issue is an "internal matter" in which other countries are not allowed to interfere.

But it is clear to everyone in the Chinese world who has not spent the past seven decades under a stone: Taiwan does not want to join the People's Republic at all.

Xi's announcement can only be a peaceful reunification by military means. Taiwan's President Tsai Ing-wen made this clear immediately. She interprets Xi's statements as a threat of "annexation", which Taiwan will oppose by all means. Such replies to China, however, are pure routine and repeat themselves regularly.

If you look at Xi's announcements with regard to Taiwan, you will not see any new tightening of the tone in the pithy words of this weekend. The phrases and words all represented the Communist Party's point of view as early as January of this year . At that time, they were even paired with the warning that formal independence meant war. However, by reaffirming China's "determination" to resolve the Taiwan problem once and for all, Xi is not withdrawing any of the existing threats.

There are also non-verbal messages. China sent large squadrons of fighter jets into Taiwan’s Air Defense Identification Zone (ADIZ) earlier this month than has ever been done before. In the overall picture, there is therefore an increase in the degree of threat to Taiwan - and this corresponds exactly to Xi Jinping's agenda to present China on the international stage more strongly and more confidently.

At the beginning of the Communist Party statements against the island in 1958, under Mao Zedong, was the "Letter to our compatriots in Taiwan". The accusation was that Taipei was being instrumentalized by America against its own country. The signatory was a highly decorated general of the People's Liberation Army, Peng Dehuai. Mao himself had recently issued the formula for the "peaceful liberation of Taiwan". Since then, the slogan has been in use: "We must and will absolutely liberate Taiwan!" (一定 要 解放 台湾) The sentence even became a song text. The narrative was set and read: Taiwan has been annexed by America and needs to be liberated. During this period, the People's Republic also developed the habit of bombing Taiwan's offshore islands.

Since then, there have been two major renewals of the letter to Taiwan: one in 1979 under the reformer Deng Xiaoping and one in 2019 by Xi. The message under Deng was worded in an emphatically emotional way. The core topic was the "longing" for mutual communication and national unity, which connects both sides. At that time, however, it was already said: "The reunification of our fatherland is a task that no one can evade." However, the authors lured with a "bright future together". Both the economy and the international reputation of China were then on the upswing.

Read more: Taiwan vs China War | President Tsai Ing-Wen Does Not Want To Bow To Pressure From China

So, 20 years after the original Taiwan letter, Deng's tone was turned positive. The message sounded respectful, the offer of a reunification at eye level seemed downright sincere. At that time there was no talk of "liberation"; instead Deng used the word "reunification".

Another 30 years later, however, Xi changed the tone again - and not to the friendlier. Even the few remaining respectful elements now sound like threats. The main points of the 2019 Xi Doctrine, which is still in force today, are:

- The only remaining obstacle for China to regain real greatness is Taiwan's refusal to join the People's Republic.

- The split in China is in the context of foreign interference since the Opium Wars. The "confrontation" along the Taiwan Strait is the last remnant of the shameful weakening of China by the colonial powers.

- The reunification should take place according to the principle of "one country, two systems".

- China "must and will" be reunified.

- In the case of Taiwan's formal declaration of independence, there is war.

Both "peaceful reunification" (和平 统一) and "one country, two systems" (一国两制) are among the basic principles of the party's political thought. However, the formulas have long since frozen and are only repeated routinely. In 2019, the idea of   "one country, two systems" may still have a little bit of credibility attached to it. However, the formula was originally devised for Hong Kong. Since the implementation of the security law in Hong Kong, however, little has remained of the two systems mentioned: Since then, there has been almost as much arbitrariness and suppression of freedom of expression in Hong Kong as in the rest of the People's Republic.

Lure calls ignore the reality of life
The bombastic appeals to China's greatness and the messages to the "national comrades" or "compatriots" on the island meanwhile completely ignore the local attitude towards life: Young people identify themselves as "Taiwanese", not as "Taiwanese Chinese" and certainly not as "Chinese" . Nor do they see themselves culturally in continuity with the mainland. That is why they elected President Tsai to office : she promised a more self-confident course towards Beijing.
In fact, Tsai ensures a clear demarcation from the Xi doctrine. This also shows her unequivocal reaction to Xi's speech over the weekend. She held a military parade and emphasized her country's readiness to defend. But in this way there is still no way out that would combine both attitudes. One thing is certain: in the case of Taiwan, "peaceful reunification" remains a contradiction in terms.
A convergence scenario was at least conceivable under Tsai's previous Kuomintang (KMT) governments. This was especially true when the leadership generation around Hu Jintao was in charge in Beijing. The realization of "one country, two systems" could still be taken from her in principle. In the terms of office of Xi and Tsai, however, the ideas now diverge so widely that there is only one way into the future: maintaining the status quo. If you listened carefully, you actually found this expression in Tsai's counter-speech. Taiwan wants to fight to maintain the status quo, she said on Sunday.
Do You Know What we Have Posted on