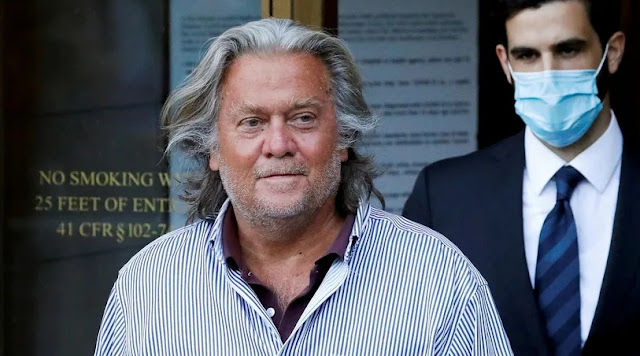 Donald Trump's former chief strategist refuses to testify about the storming of the US Capitol. The responsible congress committee does not want to accept that.

The committee of inquiry to come to terms with the attack on the US Capitol wants to bring former Trump adviser Steve Bannon to justice. The committee unanimously adopted a report finding Bannon's disregard for Congress.

In a next step, the House of Representatives, dominated by US President Joe Biden's Democrats, has to vote on it before the case goes to court. Bannon was former President Donald Trump's chief strategist for a few months.

Bannon had failed to comply with a summons to the committee last week. He invoked the president's prerogative to withhold certain information from Congress or courts - the so-called executive privilege. The report now adopted says that even if Trump could seek this privilege, it would not relieve Bannon of his duty to testify before the committee. Bannon's refusal has no legal basis and violates legal provisions.

The committee in the US House of Representatives is to investigate the background to the attack on the Capitol. Supporters of Trump stormed the seat of the US Congress in Washington on January 6th. Five people died, including a police officer. Bannon is suspected of having had prior knowledge of plans for violent protests. The day before the storm he had said in his podcast, among other things: "Tomorrow all hell breaks loose."

Committee chairman, Democrat Bennie Thompson, said Bannon must cooperate with the investigation "or he will face the consequences." Thompson warned other witnesses not to follow Bannon's example. Republican vice-chairman, Trump critic Liz Cheney, said Bannon and Trump's invocation of so-called executive privilege suggests "President Trump was personally involved in the planning and execution of Jan. 6, and this committee will get to the bottom".

Trump had filed a lawsuit in a federal court in the US capital Washington to block the release of documents to the committee. He accuses his opponents of chicane. The White House announced that Biden would not stop sharing documents from the National Archives with the Congress Committee.

There had been heated arguments between Republicans and Democrats over the committee of inquiry. Among the nine members are seven Democrats and only two Republicans, both of whom are designated Trump critics. In addition to Cheney, there is Congressman Adam Kinzinger. Trump's camp, however, failed in dozens of courts with lawsuits against the results.

Trump had pardoned Bannon, along with more than 70 other people, just hours before the end of his term in January. Bannon was arrested on charges last year. He is said to have diverted money from an online fundraiser to build a wall in Mexico for other purposes. He pleaded not guilty and was released on bail. Bannon is a co-founder of the right-wing Internet platform Breitbart and is one of the most influential voices in the ultra-conservative camp of US politics.