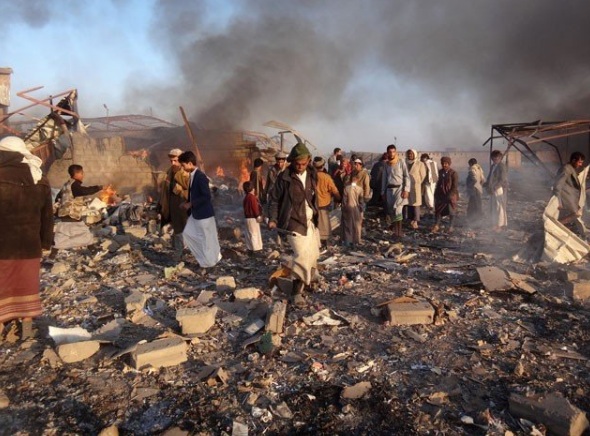 The  Arab League has claimed responsibility for airstrikes in the Yemeni city of Marb, killing more than 160 Houthi rebels.

According to Al Jazeera, a statement issued by the Arab League said that the Houthi militia had suffered heavy casualties and financial losses in the air strikes in the suburbs of Al-Abdiyah district and the city of Marab in Yemen. The attacks killed 165 insurgents and destroyed 41 vehicles.

The statement added that the Houthi militia was trying to terrorize civilians and prevent them from providing medical assistance in al-Abdiyah.

On the other hand, according to the Saudi news agency, in the last 24 hours, 32 airstrikes were carried out on Al-Abdiya and the northern city of Marab to stop the advance of the insurgents, as a result of which more than 160 insurgents and 11 military vehicles were destroyed. There were no immediate reports of injuries or severe damage.

The Arab League says more than 700 insurgents have been killed in airstrikes in Marb so far. Houthi rebels began a major offensive in Marb province in February this year. According to the United Nations High Commissioner for Refugees, thousands of people have been displaced from the province this year, with more than 10,000 displaced in September alone.

Hussein al-Bakhithi, a political analyst and journalist who monitors the Houthi movement, told Al Jazeera that the rebels are advancing and most of the fighting is advancing towards Marb province. They have the help of the locals in this work because if they don't help the Houthis, I don't think they will be able to advance even a meter.

On the other hand, the spokesman of the Houthis, Muhammad Abdul Salam, said in his tweet that the rebels are facing elements belonging to Al-Qaeda and Islamic State who are related to the invading forces in Al-Abdiyah. Not denied.