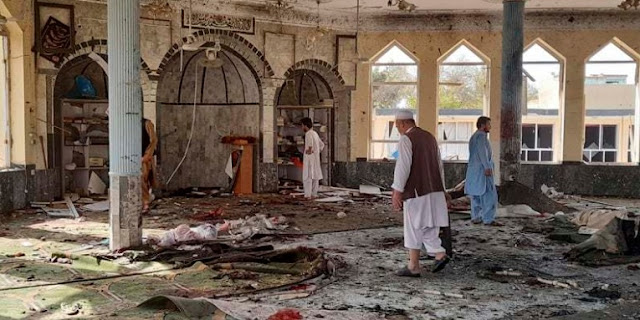 A blast during Friday prayers at a mosque in Afghanistan's northeastern province of Kunduz has killed at least 60 people and injured dozens.

A bomb blast near a mosque has killed at least 60 people and is the worst since US troops withdrew, AFP reported.

A bomb blast at a mosque in northern Afghanistan killed and injured 100 people, Taliban police officials said, according to the Associated Press.

Kunduz Deputy Police Chief Dost Mohammad Obaida said most of the people inside the mosque were killed in the blast.

Earlier, Taliban spokesman Zabihullah Mujahid confirmed in a statement on Twitter that the blast took place at a mosque in Kunduz province, killing several people belonging to the Shiite community and injuring several others.

He said a special unit of Taliban forces had arrived at the scene and an investigation had been launched.

Interior Ministry spokesman Qari Syed Khosti confirmed the blast but did not give details.

Sources at Doctors Without Borders said the bodies of 15 people killed in a blast at a hospital in Kunduz had been brought. A hospital employee, speaking on condition of anonymity, said: "We have received more than 90 injuries and 15 bodies but the number may change as more injuries are coming.

An employee of a foreign aid organization was also reported injured. Locals said the blast took place during Friday prayers at the mosque. Witnesses said they were praying when the blast occurred.

Earlier, on October 3, a bomb blast outside a mosque in the Afghan capital, Kabul, killed two people and injured several others.

The bomber struck near the entrance to Kabul's Eidgah mosque, where the mother of Taliban spokesman Zabihullah Mujahid was holding a condolence meeting.